Further details of George Pell's investigation have been released by Victorian courts as the cardinal faces his second night behind bars.

"After spending a sleepless night reflecting upon the terrible choice of a phrase I used in court during the course of a long and stressful process, I offer my sincerest apologies to all who were hurt or offended by it," he said in a statement released on Thursday.

"I apologise profusely to all who interpreted it in a way it was never intended: it was in no way meant to belittle or minimise the suffering and hurt of victims of sex abuse, and in retrospect, I can see why it caused great offence to many."

Earlier on Thursday, video showing the moment Pell was confronted with the allegations that he sexually abused two choirboys was revealed publically for the first time.

The footage, released by Victoria's County Court, shows Pell reading from a pre-prepared statement, that he had compiled knowing the nature of the allegations against him.

"From what I've been told the allegations involve vile and disgusting conduct contrary to everything I hold dear," he said.

George Pell in Rome when he was first interviewed in relation to allegations he sexually abused two choirboys.

"What a load of absolute and disgraceful rubbish, completely false, madness."

The interview took place in Rome in 2016, after Australian police questioned the cardinal inside the Hilton Hotel, not far from the Vatican. He was formally charged almost eight months later.

The footage was released alongside photos showing where Pell committed the abuse.

The photos, which were used as evidence in Pell's trial, are of the hallway and priest's sacristy at Melbourne's St Patrick's Cathedral.

The two boys "nicked off" after a Sunday solemn mass in late 1996 and were caught swigging sacramental wine in the priest's sacristy by Pell, who had been newly installed as Archbishop of Melbourne. 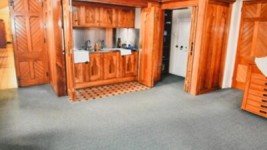 The sacristy at St Patrick's Cathedral.
SuppliedPell scolded them, exposed his penis from beneath the ornate ceremonial robes, and molested them.

A Melbourne jury in December found Pell guilty of five charges - one of sexually penetrating a child and four of committing indecent acts with children.

The hallway leading to the sacristy.
SuppliedIt comes as Victoria Police confirmed it was not investigating any other cases involving Australia's highest ranked Catholic.

"No, not involving George Pell. No I don't believe we are doing any other investigations there," Chief Commissioner Graham Ashton told 3AW radio.

"Over and above what has been handled, not that I am aware of."

The 77-year-old will now serve his second night in jail after being remanded in custody on Wednesday.

Pell won't apply for bail or pursue his appeal until after he is sentenced by County Court chief judge Peter Kidd on March 13.

READ MORE
After first night in prison, what's next for George Pell?

Each of the five charges Pell was convicted on by a jury last December carries a 10-year maximum sentence.

"For high-profile prisoners, certainly they have to take all appropriate measures to keep them safe and I am sure they will be doing that in this case," Chief Commissioner Ashton told 3AW on Thursday.

Former prime minister John Howard was among 10 people to submit a character reference to the court and described Pell, who he had known about 30 years, as of "high intelligence and exemplary character".

"I am aware he has been convicted of those charges; that an appeal against the conviction has been lodged and that he maintains his innocence in respect of these charges. None of these matters alter my opinion of the Cardinal," Mr Howard said in his statement.

"Strength and sincerity have always been features of his personality.

"I have always found him to be lacking hypocrisy and cant. In his chosen vocation he has frequently displayed much courage and held to his values and beliefs, irrespective of the prevailing wisdom of the time.

"It is my view that he has dedicated his life to his nation and his church."

Cardinal George Pell in Rome. The church has been urged to act on the disgraced cleric as soon as possible.
AAP

Judge Kidd regards Pell as unlikely to reoffend, while prosecutors say he is remorseless and shows no insight into his crimes.

Pell will be registered as a serious sex offender.