The Queensland government is facing calls to release a report into the deaths of 55 children, with one MP slamming the lack of transparency.

The Queensland government is facing calls to release a report into the deaths of 55 children in order to help reform child protection.

Of the deaths, which occurred last financial year, 10 were due to assault or neglect, six were by suicide and two drowned.

A further seven died by “unknown” causes and nine had “sudden unexplained deaths”.

Another toddler has drowned in foster care after being removed from his loving mother just three weeks earlier.  Many mainstream news outlets have publicised the death, but there has not been one mention that the child, Braxton, was prematurely taken from his mother, prior to supports being provided as per usual, and placed in the care of more lousy and careless foster carers who only care for the money the child will bring them, and not the child himself.

Time and time again, children die in the so-called "care" of the department, without anybody being held accountable.

Braxton was only two years old and his life was taken by the agency that purports to be there to protect children.  It is time charges are laid for carers who kill children in their care.

Life Without Barriers was responsible for Braxtons placement with his fostercarers that ultimately led to his death.  Coroner photos of the place show a filthy green pool lacking adequate safe fencing that had obviously been in a state of disrepair for months prior to Braxton drowning in it.  There were also drugs and empty beer cans strewn all through the putrid house.

To this day, neither the fostercarers responsible for this tragedy - or the NGO - have been charged with his reckless death.

LWB has a long history of children being raped and dying u der their watch but somehow manage to keep their multimillion dollar for profit business of trafficking children. Maybe this is due to those who originally formed the organisation - regardless of it’s massive conflict of interest.

NONI Carter sat in East Maitland Supreme Court for many days over the past month and cried for a little girl she never knew.  "I was there for the child, and on many occasions I was the only one there," said Carter, of Thornton, about the seven-year-old, whose death by starvation at Hawks Nest in November 2007 shocked a nation and led to murder and manslaughter convictions against her parents this week.

Like many, Carter felt the child was a silent victim in this deep tragedy. Even the judge, Supreme Court Justice Robert Allan Hulme, felt moved to restore her dignity by going against NSW legal convention and allowing the child some manner of identification, ruling on Wednesday that the media could identify her in reports on the case by her middle name, Ebony.

[How Victoria let down 610 children who needed help the most].

A shock new report reveals 27 children died in the past year while in the care of child protection workers, or soon after leaving.

The deaths of another five children who were known to the Department of Human Services were also investigated last year.

A WOMAN caring for a 20-month-old foster baby has been sensationally charged with his murder in the latest case to rock the embattled child protection system. The 40-year-old carer, who cannot be named under NSW law, was arrested yesterday over the suspicious death of the toddler in 2015. The fatality occurred in a small rural town 100km northwest of Dubbo. A police statement confirming the woman was “charged with murder and refused bail” comes after The Daily Telegraph made multiple inquiries. The newspaper had discovered the Aboriginal child had a broken femur and multiple bruises on his face at the time of his death. His biological mother said she was “desperate for answers” and had been “left in the dark” by the government and the foster care provider — Uniting. 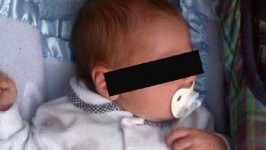 “We don’t know anything,” she said. “We haven’t been told anything.

“We didn’t even get to see him until three weeks after he died.” The mother said she was the victim of an abusive partner and reached out for temporary help until she could provide a safe home for her son. Two months later he was dead.

Elsie was named Shayla O’Brien by her birth family when she was born in November 2014.  Murdered baby Elsie ‘would still be alive if social services had not taken her’.

The birth family of Elsie Scully-Hicks have said she would “still be alive today” if she had not been removed from their care by social services.

Ms LINDA BURNEY: This is a terribly sad case that occurred three years ago. I ask members to listen carefully, in particular the member for Goulburn. Despite investigations by the Coroner and the New South Wales Ombudsman, the cause of death could not be determined and the baby may have been still born. In fact, this little baby probably never took a breath. I will repeat this just to make it absolutely clear.

The SPEAKER: Order! Members will listen to the Minister in silence.

Ms LINDA BURNEY: Separate investigations by the Coroner, the police and the Ombudsman have been carried out and not one of those experts or professionals has ever identified any grounds to substantiate a charge of murder—

The SPEAKER: Order! The Leader of the Opposition will cease interjecting.

Ms LINDA BURNEY: —or found any basis to support the allegations of a cover-up.

Mr Barry O'Farrell: He does not have access to the case worker.

Ms LINDA BURNEY: If you can just hold your tongue for one minute, you will find out.

The SPEAKER: Order! A question has been asked on a serious matter and the Minister is giving her answer. I again ask members to listen to the Minister in silence.

Ms LINDA BURNEY: How utterly irresponsible of the member for Goulburn to start smearing a family with the gravest of possible charges, all without a shred of evidence to support such a charge. The member for Goulburn evidently launched this crusade against this family not only without evidence but also without any thought of what those kinds of allegations do to the other children in the family. They do not deserve this. I know from some of the letters I have received from the member for Goulburn that she fancies herself as a bit of a social worker. She now seems to think she is also a judge and a jury.

Ms Pru Goward: Point of order: Standing Order 129—it was a very direct question: Will the Minister re-investigate the matter?

The SPEAKER: Order! Members will come to order. The Minister's response is clearly relevant to the question.

Ms LINDA BURNEY: The allegations of a cover-up in this matter are simply absurd. Community Services conducted an internal review to examine whether there was anything the agency could learn from this case because there are always things we can learn, or might do differently with the benefit of hindsight. We recognise that and that is exactly why a review of this case was conducted. The Opposition knows all of that because it has a copy of the review report. The Opposition requested information under freedom of information and it was provided. The Opposition also asked questions on notice, which were answered. So where is the cover up? Where is the secrecy? The internal review focused on the way the case was managed prior to the tragedy. Community Services was never made aware of the pregnancy, nor received any reports about the existence of the unborn baby, until the discovery of the body. The mother in question kept her pregnancy to herself.

All information about this case, including findings of the Coroner and police were provided to the Child Death Review Team. Furthermore, all of the Community Services information about this family was provided to the Special Commission of Inquiry. Where is the cover up? It would be laughable if it were not so horrifying to think that the member for Goulburn is holding herself up as ready to take on the responsibility of the Community Services portfolio. Families in New South Wales be warned! I am aware that the employee of Community Services was quoted in a media report. I am concerned about confidentiality. The investigation of that staff member had nothing to do with this case. This matter was completely unrelated to the death of the baby in Belmont. Any allegation of that kind is serious and an investigation was undertaken. The findings of that investigation led to disciplinary action, which was eventually settled in the Industrial Relations Commission.  (Source : http://www.parliament.nsw.gov.au/prod/parlment/hansart.nsf/V3Key/LA20101201015?open&refNavID=HA8_1)

Kyisha Griffiths Cottom was removed from her mother by the NSW Department of Community Services because she was a victim of domestic violence.

Like most cases involving DoCS, the mother was crucified, not offered any assistance or support to be able to leave the situation, and she was turned instantly into a surrogate for the system that pretends to care for children and families.

Caseworkers chose their normal "modus operandi", and just ripped the kids from the parent who loved them, gave them to complete strangers and tried to pretend that they just have a complete new family now, and this stranger who is female, they must refer to now as "mummy".

In the time period that Kyisha was "under the care" of the department, she was moved around more times than fifteen foster homes - not exactly stable now is it.  She was then repeatedly returned to Allambi House Group Home which is where she died of a drug overdose.

Ange Love Kiszko of Australia lost her son Oshin to "Medical Kidnapping" - and it killed him.

For those who understand well that children can be legally taken from parents - and then medically treated without parental consent, even at the dead end cost of of their children's death, disability,  torture, and extremely traumatising to your mental and emotional well being.