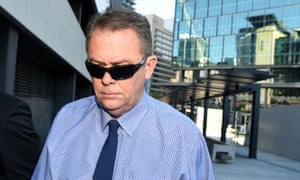 Neil Punchard pleads guilty to nine counts of computer hacking in crime that victim says was a ‘betrayal’ and left her feeling unsafe.

Neil Punchard thought it was funny. The Queensland senior constable used a police database to obtain the personal details of a domestic abuse victim and then joked when he sent her address to her violent former husband.

“Just tell her you know where she lives and leave it at that. Lol,” Punchard said in a 2014 text message to his childhood friend, who would later threaten to kill his former wife and strap bombs to their children.

Punchard was sentenced to two months in prison, wholly suspended, on Monday. His penalty is believed to be the first jail term handed out for illegal use of police databases, which has been described as a “systemic problem” in Queensland.

The victim, Julie*, says the police must now terminate his employment.

“To find out that a police officer was plotting with an abuser behind closed doors is a sense of betrayal that is difficult to articulate,” Julie* told Guardian Australia.

In 2016, police declined to bring criminal charges against Punchard. They eventually reopened an investigation last year after consistent public pressure from Julie, whose interactions with police became increasingly embarrassing for the service and the former commissioner, Ian Stewart.

Julie has become consumed by fear; heightened because police were supposed to protect her, but instead repeatedly treated her in ways that made her feel “bullied” and unprotected.

“I cannot comprehend how a person in such a trusted job could do such a horrible thing and think it would be without consequence,” Julie said.

“I live in fear every day. I never go anywhere alone because of fear. I lock the car doors as soon as I get into the car. I cannot trust new people. I am unable to make new friends or know which police officers to trust again. No matter what I do, I cannot feel safe.

“I thought that if I was brave enough to come forward and speak up, that the strength of the law would remove such a threat immediately. It has not.

“I had no choice left but to stir a hornet’s nest by going to the media with my story. If it were not for the ongoing support of total strangers responding to stories in the media and sending me the strength to carry on in the face of immense adversity and an enormous power imbalance, I am not sure how I could have stood up against the degree of maliciousness that I have endured during this process.

“I will forever feel that I have an invisible enemy lurking.”

In 2016 Julie discovered the text messages sent by Punchard on a phone that had been used by her former husband and returned to her. Crown prosecutor Angus Edwards said those messages had “inflamed the situation”, including “very very unedifying” and derogatory comments.

“Just tell her you know [the address] now via freedom of information,” Punchard wrote.

“She will be pissed … Even better just tell her you know where she lives and leave it at that. Lol. She will flip.

“I await the email and her reply. Lol. She will fucking explode. Lmao.”

In another set of messages, the senior constable offered to assist the man with any police complaints.

“The police will contact you if they want to speak to you … then you give them my name. That is your get-out-of-jail-free card,” Punchard wrote.

“I have completed an email draft to send to the bitch that will hopefully make her shit herself, so I want to go over it with you before I send it to you,” he said in another message.

Punchard was first interviewed during a workplace discipline investigation in 2016 and during the process he “made admissions”, the court heard. Police officers do not have a right against self-incrimination in such circumstances, and the information is considered “compelled” and not admissible in a criminal court.

Police then made the decision – described later by prosecutors as “erroneous” – not to lay criminal charges, despite having copies of the text messages and records of the illegal database searches. Punchard was disciplined and went back to work.
Advertisement

Astonished the officer was not sacked or charged, Julie and Renee Eaves, a justice advocate whose personal details were accessed from the police system 1,400 times by 400 officers, began a public campaign for charges to be laid.

Eaves gatecrashed a press conference by the former police commissioner, Ian Stewart, who was eventually put under pressure to meet Julie and tasked an investigator to review the case.

In court, Punchard attempted to argue that his confession in his disciplinary interview had been compelled and had “infected” the process, that the charges had been brought as a result of that admission, and that his rights had been trampled.

After his application to have the charges thrown out failed, Punchard pleaded guilty.

Edwards said Punchard’s actions were “a complete breach of trust”.

“His job ... is to protect the Queensland community and he did the complete opposite of that.”

Punchard’s lawyer, Calvin Gnech, said the police officer “accepts this is a breach of trust [and that] this is a very serious matter”.

But Gnech asked for Punchard to be spared a conviction and said his client had no knowledge of any domestic violence offences at the time he disclosed Julie’s address.

Punchard might face renewed disciplinary action from the Queensland Police Service because of the criminal conviction. It is unclear yet if he will be sacked. He remains employed but has been stood down from active duty since being charged.

For Julie, the conviction is a vindication of her efforts, but provides little comfort.

She has been forced to move home twice and continues to be frustrated by long and unexplained delays in the Queensland civil and administrative tribunal, where police are attempting to appeal against a finding that they breached her privacy.

She has received no compensation.

Julie said after the hearing she was grateful Punchard received a conviction and jail term.

“I’m relieved (and) it does send an important message that this kind of betrayal of trust of the community is not OK. I now understand why so many innocent women and children are dying of domestic violence in this country because it’s not taken seriously enough.”

*Name has been changed